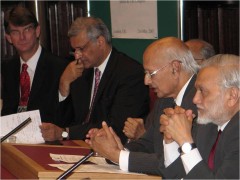 “Collective problems need collective solutions,” said H.E. Kamalesh Sharma, High Commissioner of India to the United Kingdom, in addressing an International Leadership Seminar on May 21, 2007, sponsored by the UEF in the House of Lords in London. He referred to the globalization of technology, economy and trade, along with the globalization of disease, crime and narcotics. He lamented that “only wisdom is not globalized!”

At the upper house of the Parliament of the United Kingdom, people from the world’s largest democracy challenged the United Kingdom to consider ways in which religion can join with civil society in partnership with governments and the UN for the sake of peace. “Religion is kept at arm’s length by the UN and national governments,” India’s former ambassador to Nepal, K.V. Rajan, stated. “Isn’t this good for our world when we consider the contribution religion can make to resolving, or at least diminishing conflict, through applying universally recognized values such as sacrifice and service to others?”

Concerns were raised about religion as an aggressive force. “Why has religion become militant?” asked Lord Bhikku Parekh, Professor of Global Governance at the London School of Economics. Observing that religious people feel mocked and rejected, he said, “We must find a proper and respectable place for religion in public life. Once religion enters the public space to speak, it also has to accept certain norms around respect for others and working together. The religious voice should not be monopolized by the militants or the conservatives; we should restore the voice of religion to its original values.” 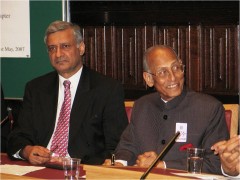 “The UEF is the forum to address these issues” said Dr. L.M. Singhvi, former High Commissioner of India to the UK. He echoed Lord Parekh’s concern about finding ways in which religion can promote coexistence: “Peace is too important to be left to diplomats and soldiers alone. Peace will not come unless civil society is at the forefront and pushing interfaith dialogue.”

Presenters expressed confidence that religion can make an essential contribution to the world by calling people to higher common values. Ambassador Sharma compared humanity to a person dying of thirst and arriving at an oasis offering bottled drinks of different flavors. “Would they argue over who has which flavor?” he asked. “Religion is the water, and it has many flavors.”

Dr. Thomas G. Walsh, stated that “religion needs to mature and grow beyond attitudes of separation and hostility. Secularization is not the final outcome of human development but rather the integration of religious sensibility with the intellectual and the technical.” He mentioned that each person arrives in the world not as an individual but in the context of the family, and a harmonious family provides the template for a harmonious society. Others commented about the need for self-reflection and internal dialogue in order to enter into constructive dialogue with others.

The potential of religious people to speak with a unified voice about common values encouraged the British audience. Rob Morris, a member of Parliament for Wolverhampton South-west said, “I learned from today’s dialogue that as a politician I need to be more relaxed about religion. Religion is precious to me and many of my constituents.” 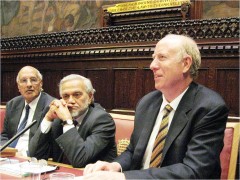 At the conclusion of the session, Lord Khaled Hameed was awarded a certificate as Ambassador for Peace. He is Executive Director of the Cromwell Hospital, Chairman of the Commonwealth Youth Exchange Council, and of the Asian Policy Group, which advises ethnic minorities.

Our Vision
We envisage a world steeped in a culture of living for the sake of others, where leaders have a parental heart towards those they lead, and young people prosper through cultivating a character of compassion.
Categories
Read Next