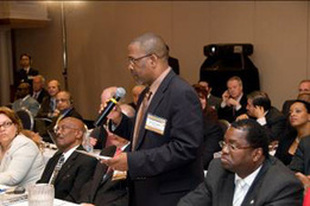 April 28 to May 2, 2008, brought together 160 delegates from 32 nations in North and South America from Canada to Argentina and Chile to consider the challenges and opportunities for better relationships throughout the hemisphere. The conference participants included six former heads of state and government, four current speakers of the house, 27 congressmen and senators from different legislatures, members of the diplomatic corps, clergy from key faith traditions, and community, youth and women leaders. With the hopeful news of the election of new governments in many nations on the one hand, and concern about the rise of potentially destabilizing populist movements on the other, the participants were set the difficult task of examining new paradigms for leadership and development.

Certainly political changes are an important part of the solution. Ambassador Charles Shapiro of the US State Department called for evolution rather than revolution, and emphasized the need for strong and free trade ties as a foundation for prosperity and more friendly ties. “There has been an important transformation going on in Latin America and the Caribbean,” he said, “and the developed world needs to pay more attention”.

H.E. Felipe Gonzalez, Prime Minister of Spain for 15 years, pointed out that successful democracy means more than successful free elections and called for deeper examination and a commitment to the entire process of good governance. “Democracy does not guarantee good government,” he said, “Politics is the art of governing shared space and getting all to feel ownership of the results”.

The event was part of UEFâ€™s series of International Leadership Seminar, designed to examine in some depth the importance of shared spiritual and cultural values as the most important ingredient for change. The ILC introduced the key concepts of the UEF Peace Education curriculum, which emphasizes strong families, interfaith unity, and an unwavering commitment to personal integrity and self discipline as the foundations for lasting change.